Ernest Hemingway walks into a bar. No, it's not the start of a bad joke, but rather the beginnings of the Hemingway Daiquiri, if the story is to believed.

Hemingway walks into the El Floridita bar in Havana, Cuba, and spies the bartender making daiquiris. He asks for one for himself, but with double the rum and no sugar. Apparently "Papa" loved it, and eventually claimed the bar's record of 16 of these double daiquiris in one day. But was it any good? Well, Hemingway ordered it that way because he was an alcoholic and disliked sugary drinks, not because he was some genius mixologist. Go ahead, try mixing 4 ounces of rum with 1 ounce of lime juice. On second thought...nope.

Eventually bartenders tweaked the drink to make it more palatable, and the cocktail we know today as the Hemingway Daiquiri ended up including a bit of grapefruit juice and some maraschino cherry liqueur.

So how do we go about turning this classic cocktail into a mocktail? There's no non-alcoholic maraschino liqueur on the market (yet), so we'll combine the cherry flavor of our New Orleans bitters with a dash of orgeat (an almond syrup) to mimic the slight nuttiness of maraschino. The result is a tart and bitter, yet wonderfully balanced, non-alcoholic cocktail that Hemingway might have actually enjoyed.

Check out Death in the Afternoon next for another Hemingway classic. 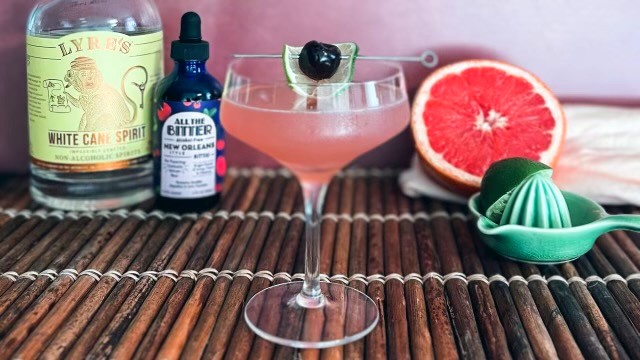 Feel free to play with the amount of orgeat to your liking. 1/4 ounce, as we have it here, is just enough to balance the tart, bitter flavors from the grapefruit and lime juice while keeping the drink relatively dry. If you prefer your drinks a little sweeter, try bumping that up to 1/2 ounce. Substitute simple syrup if you must, but the almond flavor of orgeat goes a long way here.

MAKE IT MINDFULLY LOW ALCOHOL
Want to enjoy a lower alcohol version of this Hemingway classic? Try using 1 ounce of your favorite alcoholic white rum and 1 ounce of Lyre's White Cane Spirit (or another zero proof rum alternative), while keeping everyting else the same.